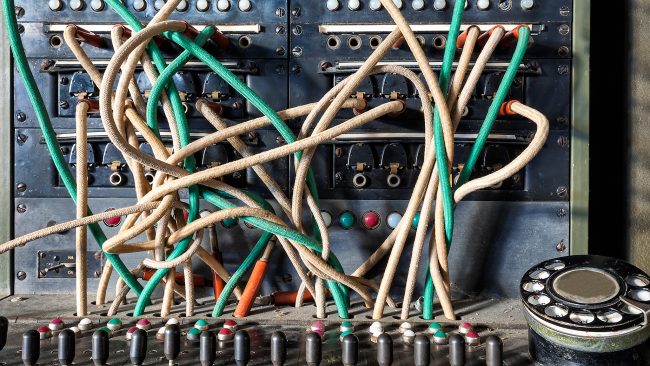 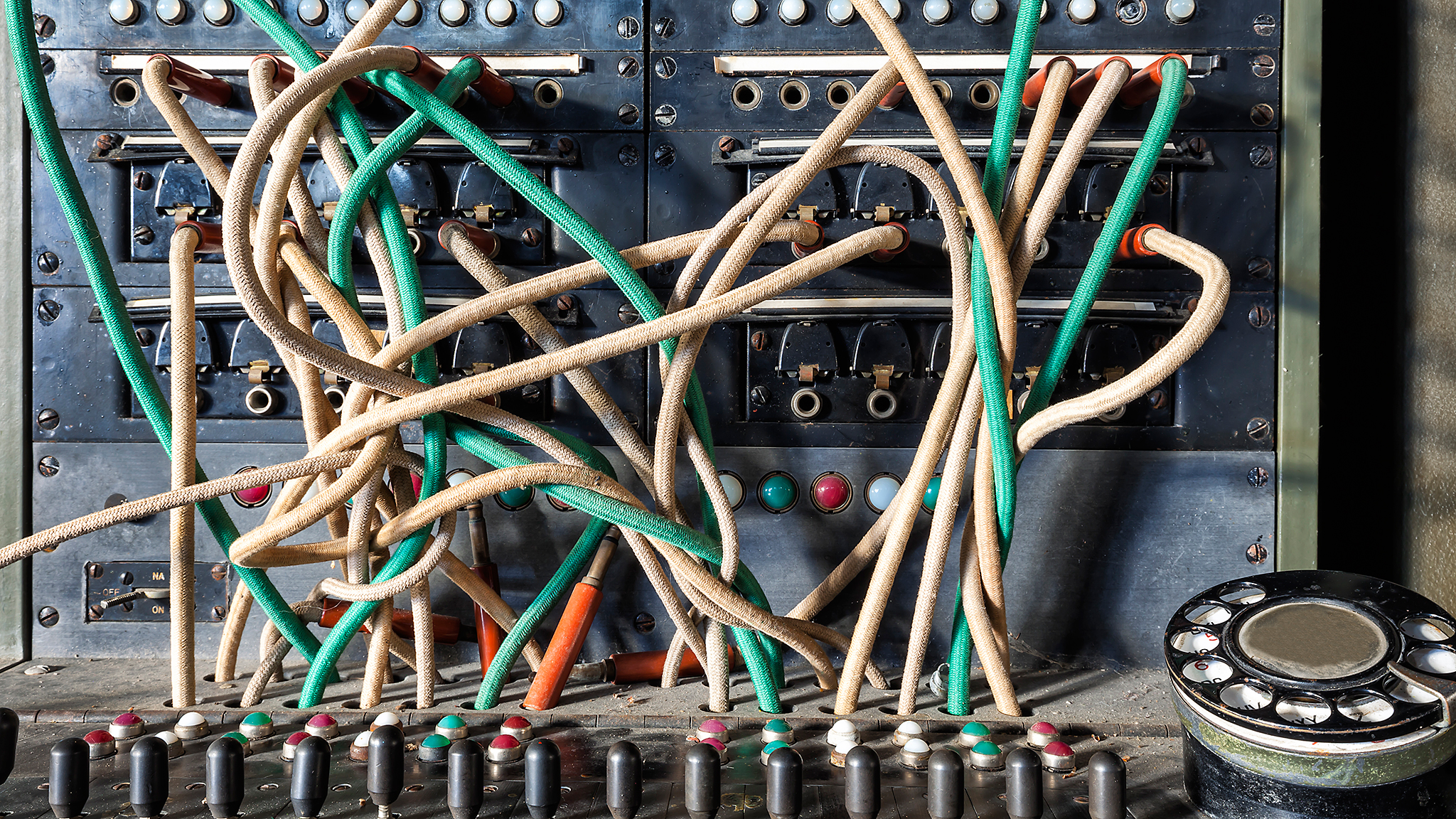 Exchange of ideas: a traditional telephone system. Today’s communication tools encourage sharing and group messaging
One of the best descriptions of the impact of modern technology on its users dates from 50 years ago. It was coined by John Culkin, a friend of media theorist Marshall McLuhan. Writing about the great man’s ideas, Culkin came up with this suitably McLuhan-sounding aphorism: “We shape our tools and thereafter, our tools shape us.”
His point was that humans develop new tools to meet the needs of the moment, but then the ways of working embodied by these artefacts become ingrained. The tools end up defining how their users think about the problems they face — at least, until either mounting frustrations with the inadequacy of the tools, or a different set of problems, causes a whole new set of tools to be invented and the process begins again.

By coincidence, next year will also mark the 50th anniversary of the moment the world got its first glimpse of the tools that would completely change working life. At a public demonstration in San Francisco, Doug Engelbart, an inventor and technology visionary working for the Stanford Research Institute, showed off a computer embodying ideas that were years ahead of their time. These included a mouse, a graphical user interface and hypertext.

Engelbart’s presentation is known in the tech world as the Mother of All Demos. It was a glimpse into a future where computers would become flexible platforms on which people would be able to elaborate and communicate their thoughts, rather than just a blinking command line interface.

Ahead of his time: Doug Engelbart first demonstrated the capabilities of a computer mouse nearly 60 years ago © Getty

But the ways of working represented by the software tools that became familiar on the PC have their own limitations. Stewart Butterfield, chief executive of group messaging service Slack, says that computing horsepower increased exponentially to make the software more useful, but the methods of work this enabled were still limited.

“Someone in the finance team today using Excel is super-powered compared to this demo in 1968,” he says. But that person is still tied to a way of working — and thinking — that is baked into the architecture of the technology. The PC applications create a degree of isolation; only after the fact is the product of their work sent to others — often as an email attachment. By contrast, “most real work gets done in groups,” says Butterfield. “The challenges around communication, co-ordination, alignment are no more solved than they were 50 years ago.”

Anyone entering working life today will find the tools of the job in a state of extreme flux. Spreadsheets, documents, PowerPoint presentations have all been changed by the cloud — sharing and group editing are the norm.

Meanwhile, new collaboration tools are spreading virally, as workers take up new internet services that make their own lives easier. These include the stream of group consciousness represented by a Slack messaging channel, the open-ended discussion around a project supported by Dropbox’s Paper, or the list-centric collaboration tool developed by Quip, which was recently acquired by Salesforce. If these and similar services have been shaped to make work more effective, then it is fair to ask how they, in turn, will shape their users — and what effect will they have on the organisations where they are being adopted.

At their worst — as anyone who uses them can attest — apps like Slack make big demands. They create an expectation that users maintain an almost constant “presence” and respond in real time. The sheer volume of communication they support can be all-consuming. Future workers could end up looking like today’s most addicted smartphone users: constantly distracted, unable to think deeply about any particular task, restless for new stimulation.

But it need not turn out that way. The techniques for managing real-time collaboration tools — and the social mores around how they are used — are still evolving. Also, they exist alongside other tools that also demand attention: that creates tension for workers, who may find themselves pulled between email apps, message streams and other communication networks. Over time, as work flows to the most suitable channel, that could change.
The rapid viral adoption of tools like Slack (it was teams of workers who took up the service, after all, not their corporate IT departments) certainly shows they fill a gap. Microsoft has also seen the writing on the wall and has come up with an alternative service, called Teams. The kind of work that tools like these are designed to enable is group-based, more fluid and geared to specific projects. They make it easier for people to move between ad hoc groups, which can form and disband as needed. They are suited to short, intensive bursts of communication among small groups that need to deal with problems in real time, not save them up for some future meeting. If the optimists are right, this will liberate workers. They will become better communicators, more willing collaborators. For many, it will sound like a more fulfilling working life than the more static, hierarchical processes that have often determined how companies operate. Of course, today’s new tools will not change office culture overnight or end the compliance straitjacket that determines how many aspects of work are conducted. Just because the internet — and, now, cloud computing — have handed entrepreneurs like Slack’s Butterfield the power to invent new tools for work, it does not mean the software they come up with will represent the final answer. It will shape its users just as surely as the software that came before did, instilling certain ways of working and thinking — with all the drawbacks that entails. At the Mother of All Demos nearly half a century ago, Doug Engelbart showed what life in a more connected workplace might look like. His presentation included videoconferencing, as well as a way for workers in different places to jointly edit the same document at the same time. More fluid forms of communication and collaboration are finally here. Work — and workers — may never be the same again.
Open relationships British anthropologist Robin Dunbar proposed that the most relationships a single person could maintain was around 150. But the teams inside large companies can be far larger than that, straining workers whose lives are increasingly spent on mass open communication channels. Among other questions this prompts are what the optimal size for a team is in the new era of work — and how these separate groups of workers can best interact.

“You can have hundreds of people on the same team, but when it gets into the thousands it starts to get ambiguous, and when it’s in the tens of thousands it’s definitely not the same team,” says Stewart Butterfield at Slack. Tools like Slack usually take hold in a bottom-up way: they are adopted by individuals or groups of workers for their own purpose, rather than being offered by a central IT department. Only later do IT administrators get to grips with how the use of technology inside their companies has evolved, bringing more standardisation and control to the way such tools are used.

Hundreds of different Slack groups can grow up inside large companies. “The downside is, it’s happening in silos,” says April Underwood, the company’s vice-president of product: small teams operate better but company-wide collaboration suffers. Slack’s answer has been to create a common directory this year for all users inside a company so that they can plug into different work groups that are relevant to them. Other companies whose services have crept in through the back door, like Dropbox, are also racing to make themselves more corporate.