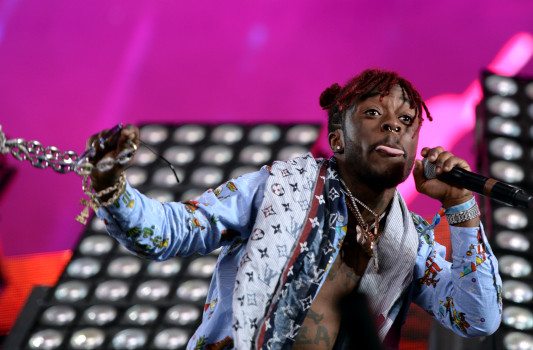 The Coachella Valley Music and Arts Festival has been known for its tastemaker capability, particularly in the indie rock and electronic dance music genres, but in 2017, the music festival at the Empire Polo Club featured more hip-hop acts than ever before, including some of the biggest acts in the genre, topped by Sunday night headliner Kendrick Lamar.

The festival’s focus on hip-hop started in 2010, when Jay Z became the first rapper to headline the festival. His electric set included a surprise appearance from Beyonce, who was scheduled to headline 2017 until doctors recommended she postpone until 2018 due to her pregnancy with twins. After Jay Z, Kanye West, Dr. Dre and Snoop Dogg, Outkast and Drake all played headlining sets on the main stage.

But for 2017, there were many more acts peppered throughout the bill in addition to Lamar.

Among the acts that played were D.R.A.M, Gucci Mane, Schoolboy Q, Future, Lil Uzi Vert and Travis Scott. The artists also brought several surprise guests with them – mostly during the first weekend. The surprise guests ended up being among the most-talked-about “Coachella moments.”

Some attendees only came because of the multitude of hip-hop acts. Others said that’s what made this year so special.

Miami friends Aileen Castro, Beily Santos, Daniela Velasquez, and Guisell Carrion were blown away by Future’s set Saturday night on the main stage. They said they danced so hard that they couldn’t move afterward and had to lay in the grass while the rest of the acts played.

The friends are all avid hip-hop fans, but Castro was dubbed the “hip-hop expert” of the group. Castro said this was her third year at Coachella, and that the multitude of hip-hop acts made the festival feel completely different.

“I like it a lot, I think it brings a lot of different people out that wouldn’t have come,” Castro said.

Two of those people were 31-year-old Shawn Gurney and 33-year-old Alex Owens, who bought last minute tickets Saturday to see Lamar on Sunday, day three of the festival. The United Kingdom couple are on a six-month trip to the United States, and arranged their stops so that they could attend the festival.

“We were only really interested in him,” Owens said.

Nigerian immigrant Moses Isang, who lives in San Francisco, said he would probably have come with his friends if the lineup was different, but that he “wouldn’t have been as hyped.”

He said the lineup worked well for the festival since hip-hop has become so ingrained in popular culture.

“Hip-hop goes across race,” Isang said. “When Travis Scott played, there were all types of different people out there.”

The group of girls from Miami said they were also surprised by Travis Scott’s crowd, thinking his audience was more niche to people who follow hip-hop.

Santos thinks Coachella is the only large music festival in the country where a lineup heavy on hip-hop would work.

“Coachella gives you so many different vibes, different artists, different DJs – other festivals it’s more specific.” “I think Coachella was made for this setting, and it was perfect.”