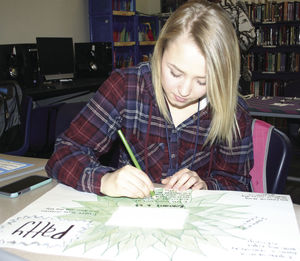 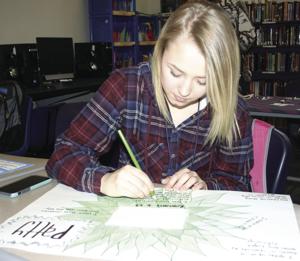 Tracy Walker moved among the desks in her classroom, observing her communications students as they used colored pencils, glue, photos and graphics to create posters about someone’s life.

Her juniors and seniors visited Diversicare this spring, talking with some of seniors living at the residential care facility, and gathering information about their family, where they lived or went to school and their past passions.

Heather Parker talked with Alice about growing up with six brothers and two sisters in a small rural community. She ended up teaching at a country school until she married.

Sonja Portenier learned that Debbie liked to write and do crafts.

“This was actually the fifth project that the Applied (Communications) students did with the theme of passion,” Walker said. “Their job was to research the passions that the residents’ once had … drawn upon the resident’s strengths, accomplishments, and family background (and) then prepare a collage that highlighted that person’s passions.”

Camryn Adams and EJ Rumbaoa learned a lot about Patty, who they agreed “loves telling stories.”

“She’s like a happy person,” Rumbaoa said. She’s been living at Diversicare since her husband died five years ago and she likes it there.

“Patty is very outgoing. I love her to death,” Camryn added. Her one dream is to get an electric wheelchair so she can get around and not have to stay in bed.

The project is a practical way for the students to practice their communication skills, by interviewing the residents, writing what they learned and creating a visual story on a poster board. It also helps them understand the value of communication in a “real world” setting, Walker said.

Raiven Glenn, senior, and Cassie Whitaker, colored a large red heart in the center of their poster, then searched for pictures to represent what Mary Lou likes – music and traveling.

When asked why they included McDonald’s golden arches, Whitaker said, because “she goes there every morning.”

What was the significance of the large heart?

“It represents the things she holds dear in her heart,” Glenn explained.

“Everyone involved in this project felt so very special, the students did something that truly made the other person’s whole week,” she continued.

The project served as a segue to creating resumes, my pages, and cover letters that the students can use for interviews taking place with local businesses. Yet it taught them more than that.

“There was nothing that the students got out of it, except for the great feeling they received from sharing. It really taught them that “giving” feels better than receiving,” Walker said.