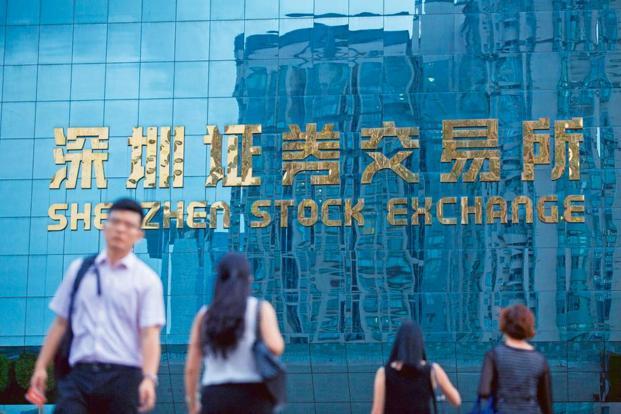 Speculation last week that officials were relaxing such restrictions helped revive trading volume and sent a gauge of small-cap shares in Shenzhen to its biggest weekly gain on record. Photo: Bloomberg

Everbright Securities Co. was among brokerages that jumped by the 10% daily limit Monday after China Securities Finance Corp. said it will restart offering loans to securities firms for periods ranging from 7 days to 182 days. The state- backed agency, which provides funding to brokerages for margin trading, will cut interest rates on the debt to as low as 3%, it said in a Friday statement.

The amount of shares purchased on margin has plunged more than 60% from last year’s pre-rout peak as traders fled Chinese equities and regulators made it harder for investors to access loans. Speculation last week that officials were relaxing such restrictions helped revive trading volume and sent a gauge of small-cap shares in Shenzhen to its biggest weekly gain on record. The Shanghai Composite Index gained 2.2% on Monday, paring its slide from its June peak to 42%.

The lower lending rates “will ease brokerages’ funding costs,” Luo Yi, a Shenzhen-based analyst at Huatai Securities Co., said in a note. “The policy change may also signal a bottom for the stock market. A modest expansion in margin finance, which is now at a low level, will help support sentiment.”

An index tracking 23 Chinese brokerages jumped 9.2% at the close in Shanghai and Shenzhen, the biggest gain since 4 November. Citic Securities Co., China’s largest brokerage by value, jumped by the day’s 10% limit, as did Everbright Securities, Founder Securities Co. and Western Securities Co.

The rate for 182-day margin loans will be cut to 3%, while that for 91 days will be lowered to 3.2%, China Securities Finance said. The 28-day lending rate will be reduced to 3.3%, while 14-day and 7-day costs will fall to 3.4%, it said. In a margin trade, investors use their own money for just a portion of a stock purchase and borrow the rest. The loans are backed by their investments, meaning that they may be forced to sell to repay the debt when prices fall.

China Securities Finance was established in 2011 to lend money and securities to brokerages to facilitate margin trading and short selling. It’s also the agency that was equipped with trillions of yuan to buy equities amid last year’s rout.

“It does look like they want a second chance at growing the equity market,” said Koon Chow, senior macro and currency strategist at Union Bancaire Privee in London. “We shall all be watching very closely whether leveraged buying of the equity market balloons again.”

Some analysts including Capital Securities Corp.’s Zheng Chunming cautioned against overstating the impact of the loosening on brokerages. Lending by China Securities Finance accounted for less than 2% of the 837 billion yuan of outstanding margin finance, according to figures on the agency’s website.

“The lowering of lending rates will be positive to brokerages but the impact is not going to be huge,” Zheng said. “This does signal the government’s support for the stock market and it should boost investor confidence.”

Moves in the Shanghai Composite over much of the past two years have closely tracked appetite for leveraged bets, which fell to the lowest level since December 2014 last week. A surge in margin loans fueled the stock boom in the first half of last year, and exacerbated the slump that followed.

The Shanghai gauge rallied 5.2% last week, while the ChiNext index of small-cap stocks jumped 13% in Shenzhen amid speculation some commercial banks have resumed non- brokerage margin lending. The practice was banned by regulators last summer, according to Guotai Junan Securities Co.

The China Securities Finance announcement is the first significant policy change by the new head of the nation’s securities regulator, according to Michael Shaoul, chief executive officer of Marketfield Asset Management. Liu Shiyu was appointed chairman of the China Securities Regulatory Commission a month ago after his predecessor was criticized for mismanaging market-rescue efforts.

“The securities agency’s move is more of a normalization and unwinding of restrictions that they’ve put in place a year ago,” Shaoul said in New York. “I don’t think they have any wish to go back to the crazy margin-driven rally in 2015, but they’d be comfortable with a gradual increase in margin lending past this point.”Bloomberg.