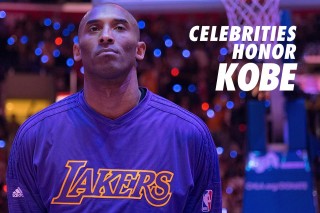 Last night, a star-studded list of celebrities and sports fans convened at the Staples Center in Los Angeles to bid farewell to the Black Mamba, Kobe Bryant. While fixtures in the Los Angeles scene like The Game and Ben Baller paid their respects, tributes came from all over, David Beckham, Kevin Hart, and Drake included.

Kobe racked up 60 points during his final appearance for the Lakers, bringing the team’s tally to 17 wins for the season. Once the match was wrapped up, Bryant took to center court to address the fans, noting “I go through 20 years of everybody screaming for me to pass the ball and the last night they’re like, don’t pass it.” The 37-year-old capped off his speech with a fitting sentiment, uttering “Mamba out” before dropping the mic.

Check out some of the most noteworthy social media salutes below, and don’t miss a transcription of Kobe’s post-game interview.

The Game shared a series of images, as a nod to his longstanding friendship with Kobe.

A brief word from one legendary athlete to another.

The OG Snoop in the house.

Don C weighs in with a Lakers-themed outfit.

Steph Curry uploads a moment from a meeting with Kobe in the past.TDE’s Schoolboy Q and Kendrick Lamar pose with Jigga man at Staples Center

We The Best captain DJ Khaled took to IG, showing a collection of Kobe-themed gear.

2Chainz was also on deck for the legendary Black Mamba’s final appearance.

Busta honors Kobe with an IG post showing the Black Mamba flying to his last game in style.

Real Madrid’s Toni Kroos is even a Kobe fan. Game recognize game.Yeezy paid his tributes as well, even rocking a Pablo-style “I Feel Like Kobe”longsleeve.

Atlanta spitter T.I. may not have been in Los Angeles for the occasion, however he still posted a fitting image for #MambaDay.

LeBron puts any underlying rivalries to the side, keeping his message to the point.