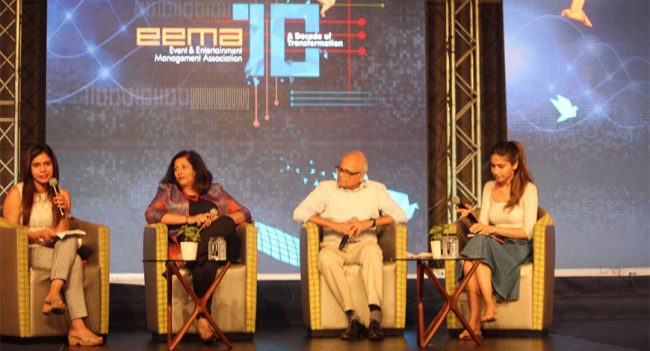 The panelists highlighted the role that ‘public relation’ plays in building and sustaining brand image. Stating that communication is a practice that involves both art and science, Sonia Huria of Viacom 18 said, “Communication is actually a marriage between art and science.” She also underlined the importance of a nuanced communication approach. Huria also spoke about the attack on the sets of Sanjay Leela Bhansali’s Padmavati, which is co-produced by Viacom 18 Motion Pictures, and how re-imagining and redeveloping the communication strategy can build favorable public opinion, especially in times of crisis.

Sharing many anecdotes about the corporate giant Vedanta Group, which has largely been seen as an anti-poor entity, Roma Balwani spoke about her approach to communication during her stint with the mining giant. Sharing how perception shift can be brought about with the right communication strategy, she said, “It is very easy to build brand reputation from scratch, but it is very difficult to rebuild the damaged reputation of a brand.” Balwani also spoke about how she helped create the much needed perception shift at Vedanta by deploying a content enriched strategy. “As an orgaisation we have to try to find out the pain points”, she added.

According to Sanjay Nigam, COO, Perfect Relations, “Adaptation is key for making a successful public relations effort.” Terming public relations as a domain that often requires a tight ropewalk, Anand cited various examples where his firm has adapted to newer challenges and benefitted the clients by embracing effective communication approaches. “It is important for clients to take a multi stakeholder approach, this especially in a complex country like India”, stated Anand.

It must be mentioned that in its 10th year, EEMA now represents India’s event industry as its apex body, with a membership of 300 companies. Since its incorporation in 2008, EEMA has rapidly grown in membership to include all significant organized players across the length and breadth of the country, and it is estimated that close to 80% of the organized revenue in this space, is represented through EEMA members.