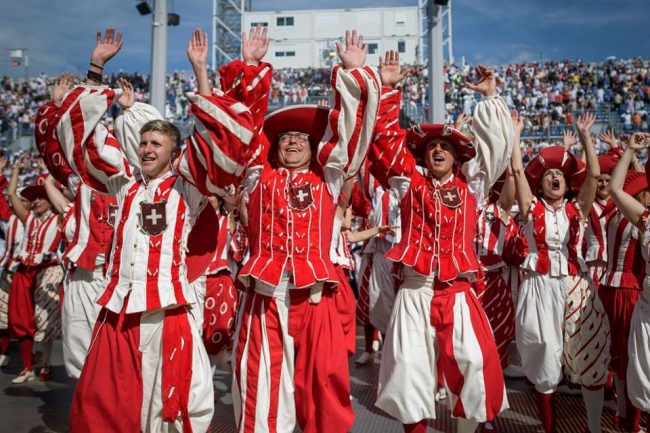 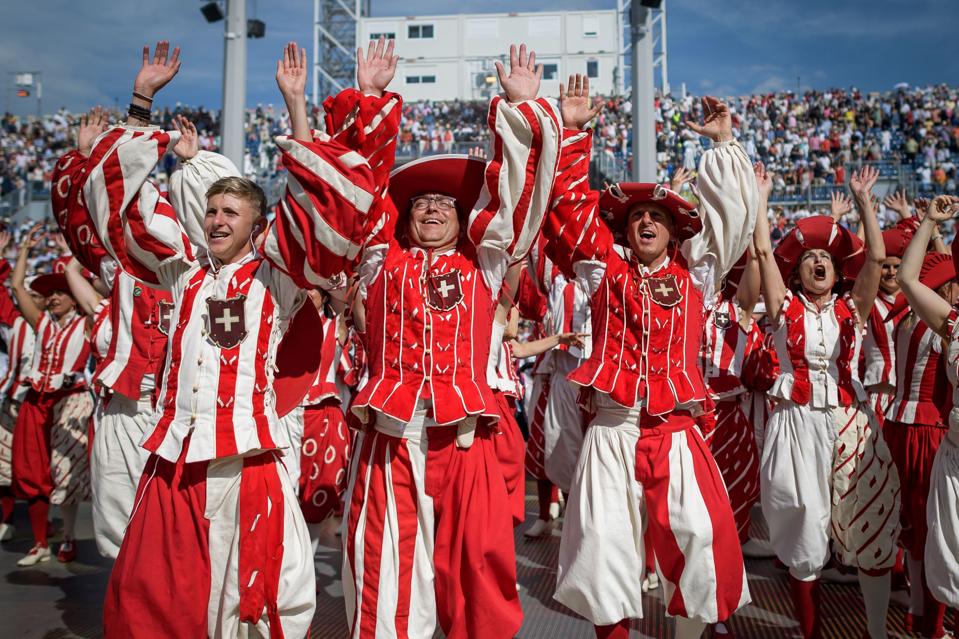 As of July 18th, 2019, Vevey, a small Swiss town of about 20,000, has been hosting the world’s biggest and rarest winemaker’s festival. Over a period of three weeks there are performances, dancing, singing, drinking (lots of drinking), music, parades and more. Sound like fun? It is. There’s just one catch: the festival is only held once every 20 years.

No, that’s not a misprint. The Fête des Vignerons—possibly the most joyous, all-encompassing and enthusiastic homage to wine and winegrowers in the world—is celebrated only once a generation. (And if you think I’m exaggerating the festival’s importance, you can take it up with UNESCO. They gave the event Intangible Cultural Heritage of Humanity status in 2016.) It’s the kind of rare, once-in-a-lifetime event no self-respecting wine lover or festival aficionado wants to miss.

Running until August 11, there’s still time to experience the festival for yourself (and you may even get to fly aboard SWISS airline’s special Fête des Vignerons plane). Here’s the inside scoop on what not to miss at this singular celebration.

The centerpiece of the festival and its overarching raison d’etre is without a doubt the daily two-and-a half-hour live performance that takes place in a temporary 20,000-seat arena built just for the event. It’s a performance filled with incredible joie de vivre and it educates as much as it awes. Akin to the pageantry of an Olympic opening ceremony, the show tells the story of a year in the life of vineyard through song, dance and theater. What makes the performance so riveting is not the spectacular costumes, nor even the live goats or crown-wearing cows. The magic of the show lies in the enthusiasm and passion of the more than 5,500 performers, the majority of whom are volunteers from the surrounding villages.

Literally years of preparation go into making the performance a reality. Entire families, from children to grandparents, rehearse for months together to partake in what is essentially a passionate paean to wine making. No one is too young or too old, too tone deaf or too clumsy to participate in the singing, acting and dancing extravaganza.

The Fête des Vignerons performance is a love letter to wine, and while the love may well be directed to all wine lands and wine growers throughout the world, the primary object of affection is undoubtedly the nearby Lavaux vineyards. So striking are the historic terraced vineyards that cover the surrounding hills that UNESCO named them a World Heritage Site.

If you’d like to see firsthand what makes the wine region worthy of such devotion, there’s ample opportunity for travelers to explore the wine lands. You can ascend more than 2500 feet into the vineyards by taking a funicular from Vevey to Mont Pèlerin and hike around the surrounding countryside. The tourism department from the nearby town of Montreux (worth a visit in its own right) has also created an app that features various routes through the breathtaking wine lands.

The magic doesn’t end once the show is over. Almost as exciting as the performance itself is the palpable enthusiasm that infuses the village of Vevey even after the daily show has ended. Hundreds of performers still in costume spread out into the city and most are more than happy to pose for photos.

Vevey’s picturesque lake-side promenade is lined with food (with both international and traditional Swiss fare), beer and wine vendors. There’s also ongoing live musical performances and dancing along the boardwalk. Even if you don’t get the chance to witness the performance live, strolling through Vevey is a less choreographed but equally enthralling experience.

With all the grape-centric festivities going on, it’s impossible not to want to learn more about Swiss wine. Near the arena, there is a Swiss wine promotion booth that offers free tastings. Each day a specific Swiss wine region is highlighted so visitors have the chance to sample the country’s wide range of vintages. Unfortunately, underscoring the fact that the Fête des Vignerons is more about wine harvesting and wine growers than actual wine, there are just a few Lavaux wine region tastings available.

Luckily there are plenty of restaurants, bars and “caveaux” (pop-up wine caves) throughout Vevey where you can taste the region’s bounty. One of the most popular places to grab a meal and a drink is at Grand Hôtel du Lac’s Buddha-Bar Beach. The first Buddha Bar in Switzerland, it serves up the best sushi in town, which you can accompany with a glass of some of Lavaux’s most award-winning wines. No matter where you decide to quench your thirst, don’t leave without trying a glass for chasselas, a full, fruity white that is the region’s iconic varietal.

The good news is that there’s still time to experience the event first hand. Whether or not you’re a wine lover, you can’t help but be moved by the locals’ extraordinary devotion to the noble grape. It’s an intoxicating experience that will stay with you long after you’ve finished that last glass of chasselas. Can’t make it this year? Not to worry, you’ll have about twenty years to prepare not to miss the next one.