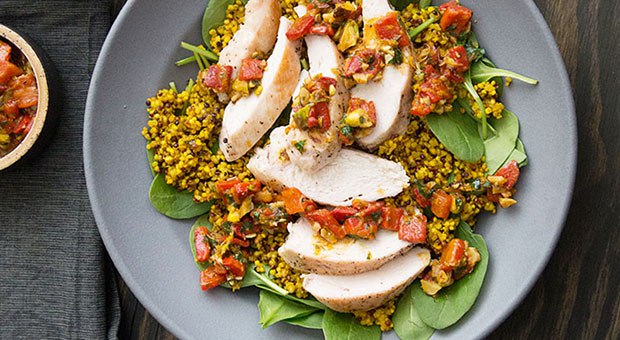 “I want to eat healthy, but it’s so time consuming and inconvenient.” If that’s been your excuse, today’s your lucky day: The six services below offer everything from ingredients for nutrient-packed meals to the meals themselves, all prepared and ready to eat. Whether you’re vegetarian, vegan, Paleo, or just looking to eat healthier in general, there’s something here to make your life easier.

Green Chef
The big idea: Order ingredients for three dinners per week, and then cook the dinners yourself.

The pros: This service ticks all the boxes for healthy, conscious eaters: Ingredients are certified organic, responsibly sourced (fish is wild-caught and beef is grass-fed), and local when possible. Additionally, dietary preferences are honored (whether you’re gluten-free, vegetarian, omnivore, or Paleo), and the packaging is made from recyclable, reusable, or compostable material. Each kit comes with recipe cards with clear instructions as well as images, so they’re simple to follow. And the food is really delicious.

The cons: When we tested Green Chef, sometimes the dishes had one element too many, leading to yet another pot or skillet to clean. What would have been fine at a certain point then required an additional sauce or set of steps that seemed unnecessary. We followed all instructions in the beginning, but by the third meal we just skipped any extra ones. Also, we found the meals to be very protein heavy, even for Paleo. But it was easy to work around this. We had a steak-and-eggs dish, for example, which came with two 5-ounce steaks and two eggs. The steak alone was more than enough protein, so we used the eggs for breakfast. Nothing went to waste.

Purple Carrot
The big idea: Similar to other meal-kit services, except that all the meals are vegan. Sign up for a membership, and every week you get a box with ingredients for three meals for two people or two meals for four people.

The pros: Everything is pre-measured, so you just do some fairly basic prep and then cook. Recipes are mostly developed by Mark Bittman, the former New York Times columnist and multiple cookbook author, with some contributed by chefs. The recipes manage to be familiar and unusual at the same time. For example, when we tested Purple Carrot, tomatoes were not in season, so they substituted grapefruit in a tabouli recipe. It was unexpected, but completely delicious. If “vegan” makes you think of rabbit food, don’t worry: The portions are generous and the meals are very satisfying.

The cons: The recipes we tried tended to be on the starchier side. Plus, the week we tested, one of the recipes included seitan, which isn’t compatible with gluten-free diets.

Terra’s Kitchen
The big idea: Approachable, healthy meal-kit delivery that aims to appeal to a variety of tastes, whether you’re vegetarian, Paleo, or gluten-free (or want a mix).

The pros: The ingredients are responsibly sourced (Terra’s Kitchen lists its purveyors on its web site), and pre-prepped. Since most of the work is already done, meals are ready in 30 minutes or less. You can customize your order, so you’re not locked in to a Paleo or vegetarian plan. Also, everything comes in a box that doubles as a fridge, which the company then comes by to pick up, cutting back on packaging waste. The meals we tried were family-friendly and tasty, and recipe cards include wine-pairing suggestions.

The cons: The meals were a bit heavy and we wanted more greens. For one meal (Garlic & Avocado Burgers with Sweet Potato Fries), we used less of the beef and added a side salad, then used the leftover beef for a different meal. It was delicious, but it took away somewhat from the convenience factor.

Sakara
The big idea: Instead of sending the ingredients, this service sends pre-made meals, all made from nutrient-rich, whole-food, plant-based ingredients.

The pros: All meals are organic and gluten-free, as well as being plant based. They’re loaded with trendy superfoods (hello, reishi mushrooms) and plenty of greens, but they’re really delicious, and not so “out there” that they’re intimidating (for example, a biscuits-and-gravy breakfast included a satisfyingly doughy oat-based biscuit and a rich, flavorful mushroom gravy). Boxes also include small bottles of infused water for morning and night, and detox teas. You can add snacks such as Sakara’s signature energy bars, popcorn and watermelon jerky (!) to your order.

The cons: Portions tend toward the small. We mostly found the meals satisfying, but bigger appetites might need to supplement the meals or add snacks for in-between.

The cost: $82/day for a one-week program (three or five days) or $69/day for a weekly subscription (five days); both include breakfast, lunch and dinner, plus waters and teas

Farmbox Direct
The big idea: This service doesn’t deliver kits or prepared meals; instead, it’s like a CSA. You choose a box size (small, medium, or large) and get seasonal vegetables, fruit, or both delivered to you every week. Juicing kits for red, green, or orange juices are also available.

The pros: Getting top-quality fresh produce doesn’t get more convenient than this. And you get up to five swaps per box, so you don’t have to figure out how to use up a vegetable you hate. The boxes and packing material are recyclable. And they include a recipe card featuring items in the box.

The cons: You give up the experience of going to the farmer’s market and choosing your own produce.

Green Blender
The big idea: Each week, you get five smoothie recipes and the pre-measured ingredients to make them. Most of the ingredients are prepped and blender-ready. The ones that do require work are simple, like peeling an orange or chopping a pear.

The pros: This service takes the fuss out of a daily green smoothie habit. You just do a little bit of prep, toss the all-organic ingredients into your blender, add a little water and ice, and off you go. We liked the flavor combinations we got in our sample box (Tropical Carrot, with carrots, pineapple, pear, goji berries, and hemp seeds, was a favorite); the smoothies were refreshing and tasty, and not overly sweet, as some smoothies can be. Plus, they included some cool superfoods, like fresh turmeric, noni fruit powder and chia seeds. So if you’re curious about some of those foods, you get to try them without buying a whole bag.

The cons: You have to really love smoothies. Five smoothies a week, with each recipe making two 12-ounce servings, is a lot. And you get what you get, there’s no customizing.