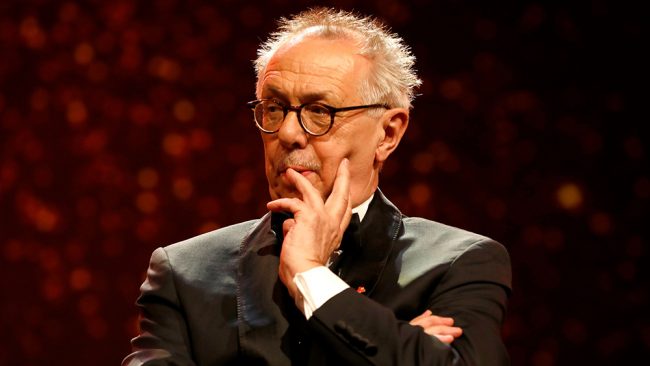 A visibly moved Dieter Kosslick received a standing ovation at the opening of the Berlin Film Festival on Thursday as he took to the stage to welcome international stars, filmmakers, and cinephiles for the final time as festival director.

The 69th Berlinale opened with a 1920s-style serenade dedicated to Kosslick by popular German singer Max Raabe and entertainer Anke Engelke, who also hosted the ceremony.

Monika Grütters, Germany’s culture and media commissioner, praised Kosslick for his 18 years at the head of one of the world’s largest film festivals.

“Our Berliner Bear in gold and silver, our beautiful trophy, is our most famous ambassador of film, but only one person can compete with him. That’s you, dear Dieter. And at the opening of your 18th and our 69th Berlinale, you deserve to be in the spotlight,” she said.

Commending the Berlinale’s political streak and strong support of female filmmakers, Grütters drew loud applause with a quote from German sculptor Renée Sintenis, on whose work the Berlinale Golden and Silver Bears are based: “Every power corrupts. The spiritual person has to therefore always live in opposition.”

The Berlinale Bear “is also an acknowledgement of all of the artists around the world who stand up against the ruling elite with the power of fantasy and who have the ambition to pour not oil but sand into the gears of politics and society, especially where despotism and injustice rule,” Grütters added.

It is that kind of artistic sentiment, “film that meddles,” that Kosslick brought onto the red carpet for 18 years. “Thank you for that Dieter. If I had a black hat like yours, I would tip it to you on this opening day of your final Berlinale.”

The Berlinale’s new director team, Carlo Chatrian and Mariette Rissenbeek, who take the reins next year, were also on hand.

The festival opened with the world premiere of Lone Scherfig’s “The Kindness of Strangers,” a contemporary drama following a disparate ensemble of characters as they all struggle to survive in a New York City winter and find laughter, love, and kindness in each other. It’s a fitting beginning to Kosslick’s final fest as topper.