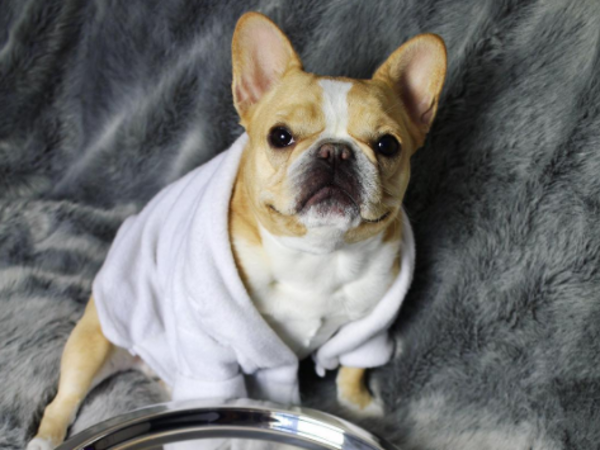 Wearing a white bathrobe, Chloe is comfortably sprawled on a grey fur blanket. She looks intently at the camera, while a silver tray full of Urban Decay cosmetics lies at her feet.

Sounds like your regular beauty influencer featuring a paying advertiser in a post on Instagram? Chloe is anything but. She is a mini frenchie – merely one of the many rising stars in the world of social pet influencers.

And increasingly, these four-legged furballs are becoming the latest faces of beauty brands, touting their products and headlining some of their biggest digital campaigns.

Urban Decay, The Body Shop, Too Faced, Nyx, Smashbox and Lush Cosmetics are among the beauty brands that have recently chosen to hire dogs and other pets as their brand ambassadors, specifically on Instagram. There has been an uptick in the number of beauty and fashion brands inquiring to partner with pets in recent months, confirmed Loni Edwards, managing partner at The Dog Agency, an influencer agency that specializes in matching brands with pet influencers.

Wait, there are pet influencers? Yes, due to the rise of the visual web and platforms like Facebook and Instagram, marketers have had a growing interest in hiring social media personalities to hawk their products in recent years.

While these influencers were initially humans, over the past few years people have also taken to following famous dogs, cats and other animals on Instagram and other social networks. Some, like the collective account DogsofInstagram, boasts over 4 million followers. And brands, including Mercedes Benz and Budweiser, have enlisted such pet influencers for ad campaigns.

Instead of relying solely on beauty bloggers and influencers as it has traditionally, the brand chose to also partner with five pet influencers including Tuna Melts My Heart, Toast Meets World, Mr. Bagel the Chinchilla, Bunny Mama, and Dogs of Instagram. Additionally, human fashion and beauty influencers Kristen Leanne and KeikoLynn were also part of the campaign.

“We’re not traditional, we’re quirky and different and are always trying to find ways to advertise that aren’t mainstream,” Andrea Blieden, vp of marketing for The Body Shop, told Business Insider. “But this was more than that, it was about remaining true to our activist roots. This is a campaign against animal cruelty, so who better to speak for the animals than the animals themselves?”

But there’s no denying that these pets help the brands broaden their audience, as well as their reach and scope. With so many pets netting thousands and millions of followers these days, brands can easily achieve scale, often at a price much lower than human influencers. (Regular influencers make anywhere between $1,000 to $2000,000 on Instagram to $200,000, while a pet influencers can make between $2,000 to $5,000 per post.) Plus, posts with pets in them tend to outperform regular posts, with higher levels of engagement, said Edwards.

“There’s been a greater push from brands because pet influencers in general provide a lot of value,” she said. “The content outperforms because it tends to get higher engagement, has more viral potential and people are more likely to tag their friends.”

“Pet influencers enjoy strong engagement rates as their content may be more shareable, more likely to elicit a response, and overall feel less promotional — even when they are touting a product,” added Kamiu Lee, head of business and development strategy at influencer network Bloglovin’.

But above all, the demand for pet influencers among specific categories like beauty brands is reflective of a bigger trend for Lee. According to her, as more consumers become pet owners and begin to consider pets to be a part of their family, verticals beyond pet food, such as home, CPG and beauty brands are starting to leverage pet influencers.

“Household cleaning brands can work with pet influencers to highlight the effectiveness of their product against everyone’s furry family member and beauty brands can highlight their commitment to animal friendly products by working with pet influencers,” she said. “The personal nature of a pet lends itself well to telling a story around a personal product you might buy for yourself.”