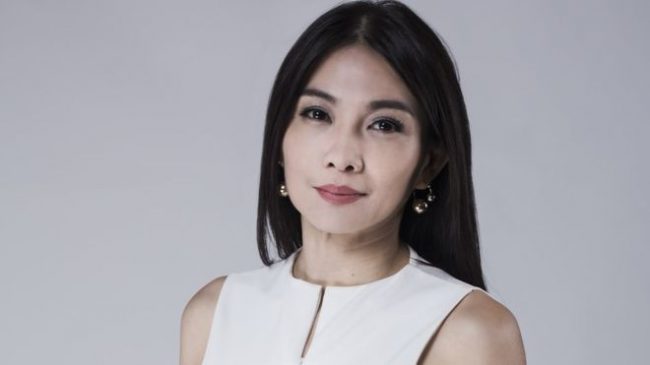 The BBC’s weekly The Boss series profiles different business leaders from around the world. This week we speak to Sabrina Tan, founder and chief executive of skincare brand Skin Inc.

For Sabrina Tan, leaving a tech career to break into the skincare industry brought plenty of challenges – including working with women.

A female dynamic in the workplace was new to Sabrina, who grew up in Singapore with three brothers, and worked at male-dominated firms such as IBM, Oracle and Hewlett-Packard after leaving university.

“I was used to being one of the few women on the team,” she says.

Suddenly Sabrina was surrounded by many other females. She’d noticed that some were shy about sharing their ideas, and many felt unprepared, when, in fact, they were often over-qualified for the job.

“It was a huge change for me to move into beauty,” she says.

She took that step just over a decade ago with the launch of Skin Inc, a Singapore-based brand now sold in the US, UK, and across Asia, that rakes in tens of millions of dollars in revenue each year.

The 45-year old credits her success to using a “tech mindset”- and drawing inspiration from her idol, the late Steve Jobs – to build a beauty company.

“I wanted to create the Apple of skincare.”

After studying business and economics at university in Singapore, Sabrina took her first job in tech, in a business development role. Over the years she found the frequent work travel stressed her eczema-prone skin.

Highly allergic to substances like dyes, and affected by changes in the weather, Sabrina was frustrated and wanted solutions. Seeing her two young children also battle with eczema forced her into action.

“I thought this is crazy, we have to outsmart our skincare routine. The moment I skipped a step, it acts up again.

“I decided to take the matter into my own hands.”

So in 2007, she set off on a fact-finding mission to Japan. Sabrina wanted to search one of the world’s biggest beauty markets for answers to why so many products had failed her.

“I started to talk to chemists and scientists. I went to drugstores, to beauty counters.”

The Japanese, she discovered, were passionate about ingredients. Eventually she found a lab that understood her hope of creating skincare products tailored to individual needs.

The trip to Japan gave her confidence to place a huge bet on that vision.

Her husband thought it was an “interesting idea”, Sabrina remembers, but wondered how she was going to cope with two young kids.

Still, she was determined, and they both quit their jobs and sank their life savings into the company. Sabrina says she wanted to “give it her all” or she would always wonder “what if?”

A year later the first store opened in Singapore. With two toddlers and a business to build, she often slept just four hours a night.

“So many times I’d just sit in the car in our driveway and wonder, ‘Am I doing the right thing?’.”

But it was six years before her fortunes were transformed, thanks to a distribution deal with global beauty powerhouse Sephora.

The French giant – with its network of bricks-and-mortar and online stores – gave her huge exposure and access to customers.

She says Sephora, which is owned by conglomerate LVMH, was interested in customised skincare, and that led one of its executives to visit a Skin Inc store.

Sabrina remembers he described personalisation as a beauty “megatrend” that millennials were chasing, and welcomed her to the Sephora world.

Skin Inc is now one of the top-selling Asian skincare brands on Sephora, she says.

The Singaporean brand – which makes all its products in Japan – is available globally via its website.

Retailers like US department store chain Nordstrom are also important, and later this year Skin Inc will launch in luxury stores Bergdorf Goodman in New York and Selfridges in the UK.

Some of the brand’s promises are familiar, such as beauty treatments for time-starved women.

But technology is central to the brand. It helps Sabrina develop new products while guiding her thinking.

The company – which has staff spread across Singapore, China and the US – has harvested customer data from more than a million “skin checks”. It does this via online surveys.

They use that pool of data – like how many women don’t get enough sleep, or aren’t exercising – to develop more personalised products.

Sabrina says: “In tech we always have a troubleshooting mindset, we diagnose the problem and then go down to the core, to what will solve the problem.”

Sharon Kwek, senior beauty analyst for Asia-Pacific at Mintel, says Skin Inc’s approach to individualised skincare was “captivating” when the business started out.

“At that point skin profiling and customisation wasn’t so commonly explored. [Whereas] Skin Inc caters to every individual’s skincare needs,” she says, contrasting with mass brands that focus on one-size-fits-all products.

So far Skin Inc has raised funding from investors in Hong Kong and Korea, on top of Sabrina’s own initial investment.

The next chapter could take the business in new directions. Fitness studios, wellness centres, and skincare vending machines, are among Sabrina’s ambitions for the future.

For now, her days are stacked with meetings touching every aspect of her company – from talking with suppliers, to developing social media strategies.

She juggles early morning and late night calls around family time, as well as “bonding with her team over red wine”.

“It’s a great antioxidant for our skin!”