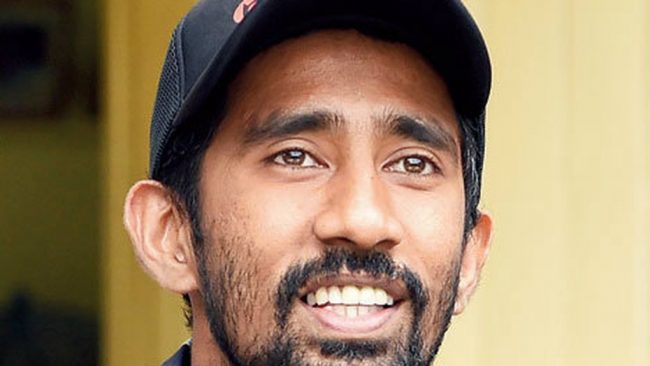 When Wriddhiman Saha takes those stunning catches, airborne, caught within his big gloves is the romanticism of wicketkeeping.

But to do that, it is not just his skills that come into play, it is also his extraordinary fitness that lets him dare those gravity-defying acts that remind the world what a good wicketkeeper is all about.

Chinmoy Roy, a former strength and conditioning coach of the BCCI and the National Cricket Academy (NCA), would, however, tell you that Wriddhiman is not a fitness freak. At the same time, Roy would award the 35-year-old top marks as far as fitness is concerned. What is the secret then?

“During my time at the NCA, we used to do something called the ‘skinfold test’ on the players. It basically tells you about the amount of fat in the body. For the cricketers, it had to be less than 65mm. Can you guess how much Wriddhiman scored in that? He had just 35mm of it! That is something tremendous. Only those who are supremely athletic can boast of something similar,” Roy said.

“The percentage of fat in his body is very less, so it is more about muscles and bones. And that is the secret of his fitness, his strength and agility,” Roy added.

To make his point, Roy further said: “When he used to train under me, he was lightning quick in the ladder fast feet drills which improves ground contact time. ‘Run a 3’ used to be the test of one’s agility. Mahendra Singh Dhoni and Ravindra Jadeja are leaders in this test. But Wriddhi was always among the top performers. He would crack the 9-second barrier when 9.20 second was the national target set by the NCA.

Everyone is aware about India captain Virat Kohli’s obsession with fitness. Is a comparative study possible between Virat and Wriddhiman’s fitness levels?

“Shanker Basu, the former fitness trainer of the Indian team, is a friend of mine. And we have often discussed about fitness of the India players. Among the current cricketers, Jadeja is one who is probably the fittest, but he doesn’t have to work too hard for that. He is gifted. So is Dhoni to some extent. But speaking of others, it’s Virat Kohli, Hardik Pandya, Manish Pandey and Wriddhiman who score high on the fitness scale.

“Some are good in the Yo-Yo test, which checks your stamina. Some do well in strength exercises, like Virat, who carries with him weights to the tune of 89-90kg so that his training is not hampered for lack of equipment even while he is on tour. But when you take everything together — strength, stamina, speed, agility — Wriddhiman is one of the best if not the best. I had once given him 9 out of 10, even more than Dhoni, while doing a review.”

Roy would go on to speak about Wriddhiman’s exceptional “joint mobility”, his extremely powerful leg strength that helps him trigger those Superman jumps and of course his ability to keep his nerves irrespective of the situation. But despite all that, the Labrum tear in his left shoulder forced the ’keeper out of the India team for a long time. “Labrum tear in the shoulder is a typical injury which happens to those who dive with an outstretched hand. Some may consciously try to curb those high-risk dives, but not Wriddhiman.”

Not just for catches, Roy claimed that Wriddhiman would also dive for his biriyani and ice-cream whenever there’s an opportunity. And still not put an ounce of weight on him. That’s how a superman is.